pets in my family tree

Often, families include more than just biologically related people.  They also include those furry (or feathery, scaley, spiney, etc.) animals that occupy the cherished positions of family pets.  My family tree is no different, and is filled with animals that were doted on and loved.  The following is a short list and photo collection of just some of the pets in my family tree.
In 1867, my great-great-great-grandfather's brother, Albert Jones, died.  His probated estate included an inventory of his personal possessions and assets.  As was usual, the inventory included his livestock holdings.  What was unusual though, is that all of his livestock were individually named in the inventory.  He had cows named: Lucky, Mary, Smith, Julia, Sally, Maria, Lizzie, Jane, Bully, Mollie, Blacky, Aggy and Nora.  He had mules named: Mollie, Beck, Sofa, Cola, Pat, Kit, Dinah, Tiger, Peter, John, and Collie.  He had horses named: Charlie, Jennie, Lightfoot and Billy.
My great-great-grandmother Julia Thurston Bixby had a pet goat that she particularly loved. Although the pet goat was something that many family members remembered, nobody had the common sense to record its name or take its picture. 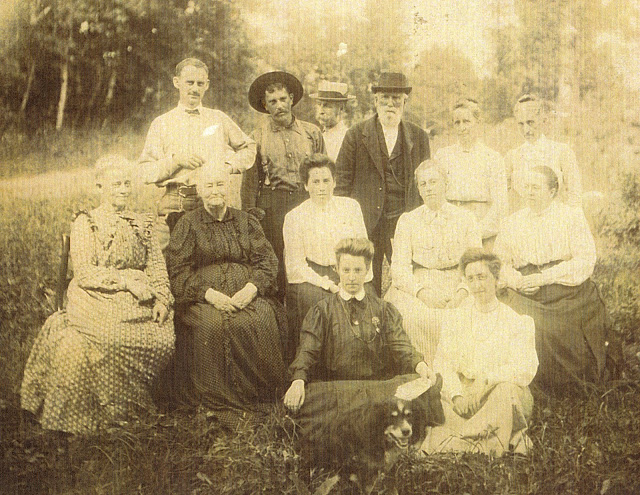 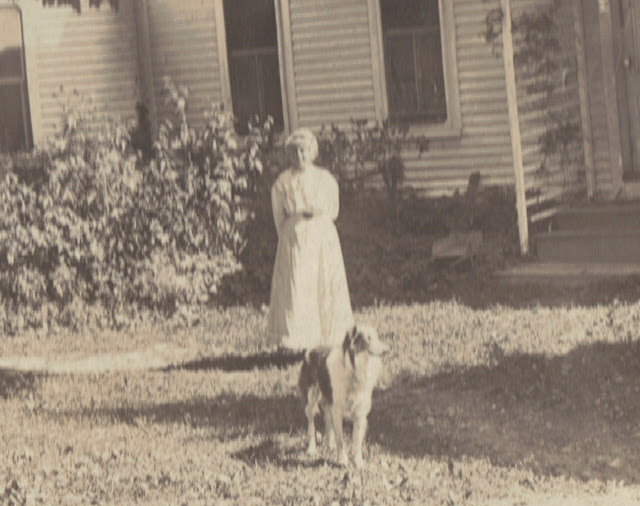 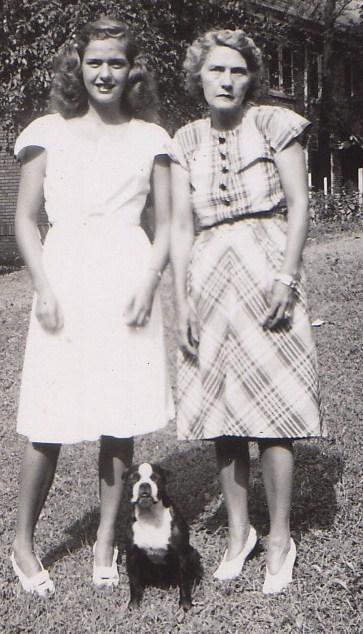 Buster Brown with my grandmother Bettye Brown
and my great-grandmother Louetha Brown.
Mickey
My other grandmother, Patricia Bixby, also had a pet Boston Terrier during the 1940's. 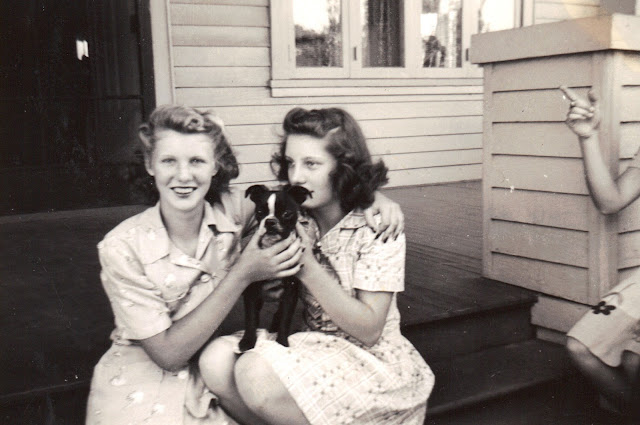 My grandmother Patricia Bixby (right) and an unidentified friend or cousin, holding Mickey. 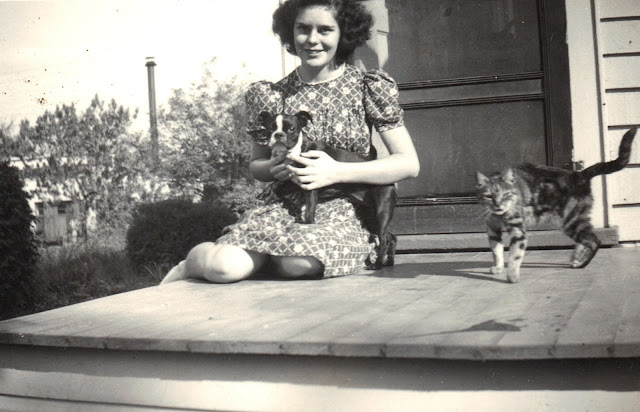 My great-aunt Evelyn Bixby holding Mickey, with a cat standing nearby (name of cat unknown). 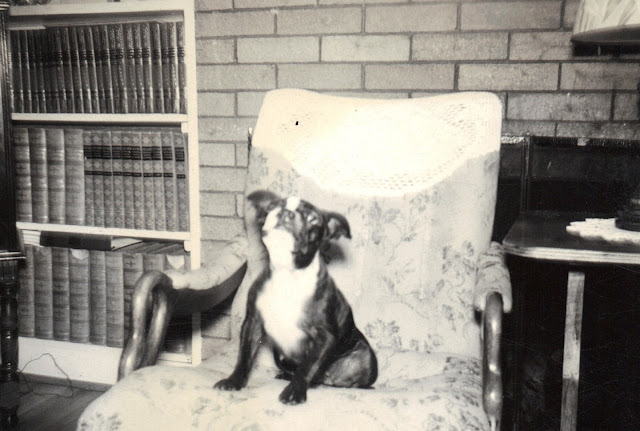 Mickey at home.
Mike and Josh
During the 1940's and 1950's, my great-grandparents Odin and Louise Wadleigh had a succession of bulldogs.  I only know the names of two of them, Mike and later Josh. 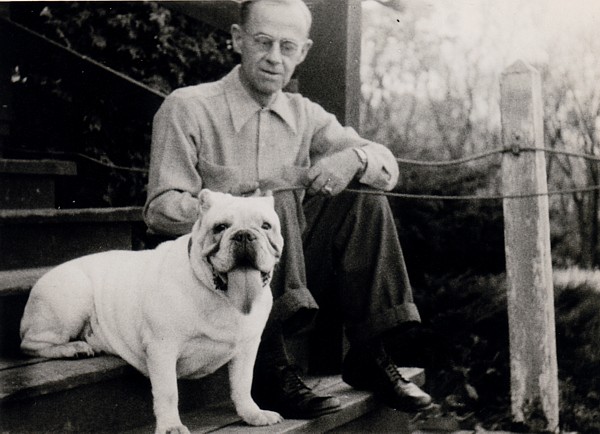 Odin Wadleigh and a bulldog. 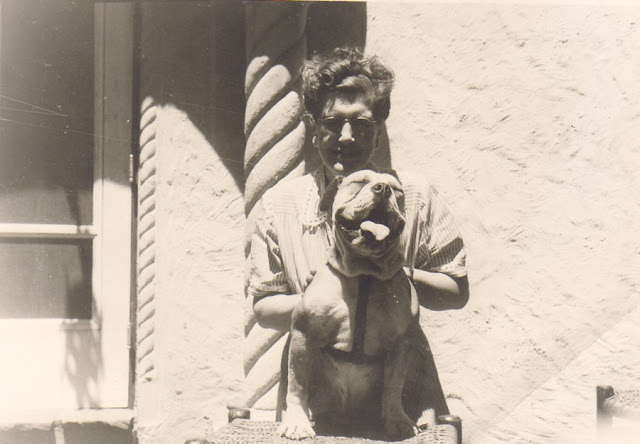 Louise Wadleigh and a bulldog. 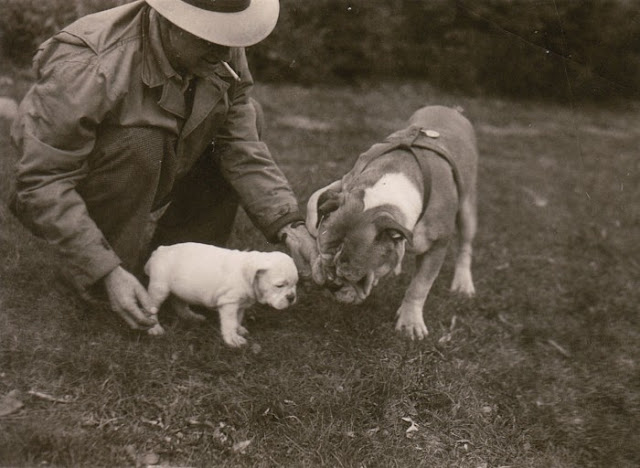 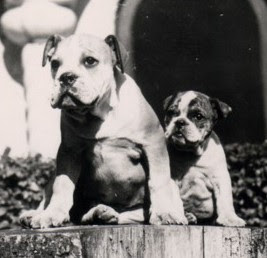 two more of the bulldogs. 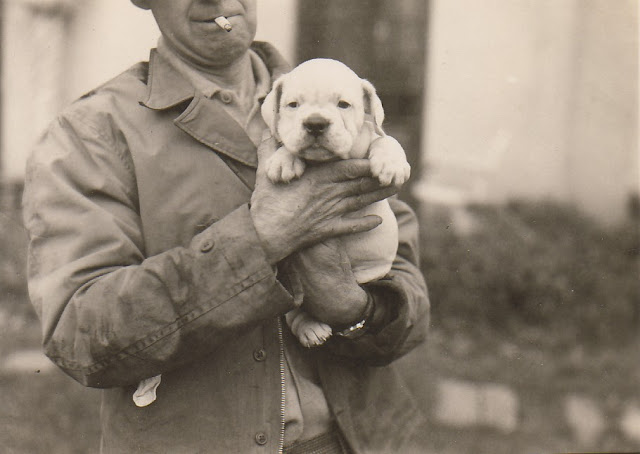 Odin Wadleigh holding a baby bulldog.
Lover and George
During the 1950's, my dad and his family had two pet monkeys.  One of them, a Spider Monkey, was named Lover.  The other, a Cabuchin monkey, was named George. 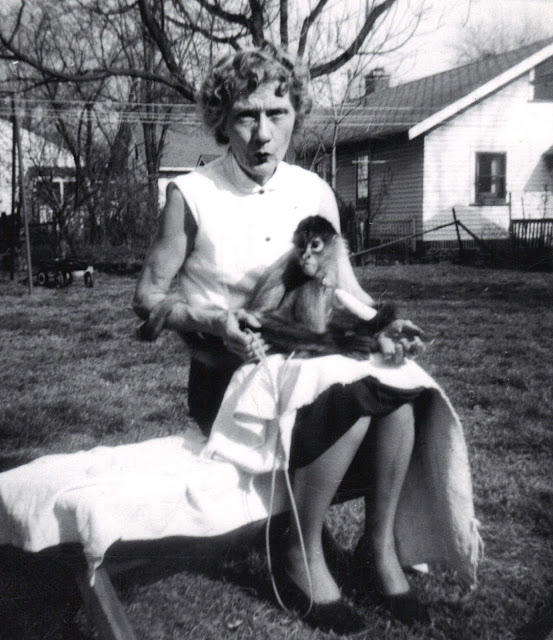 My great-grandmother Louetha Jones Brown holding the spider monkey Lover.
Chipper
During the 1960's, my mother and her family had a black standard poodle named Chipper. 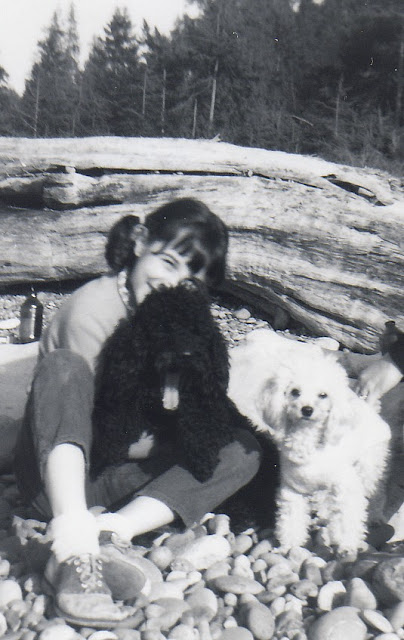 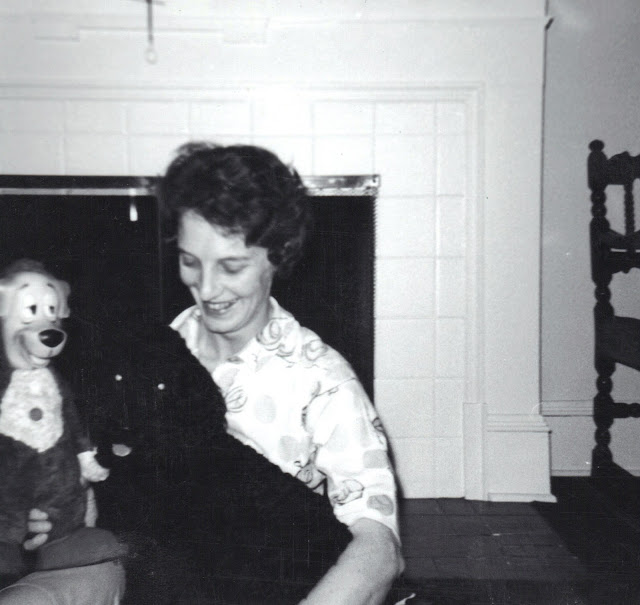 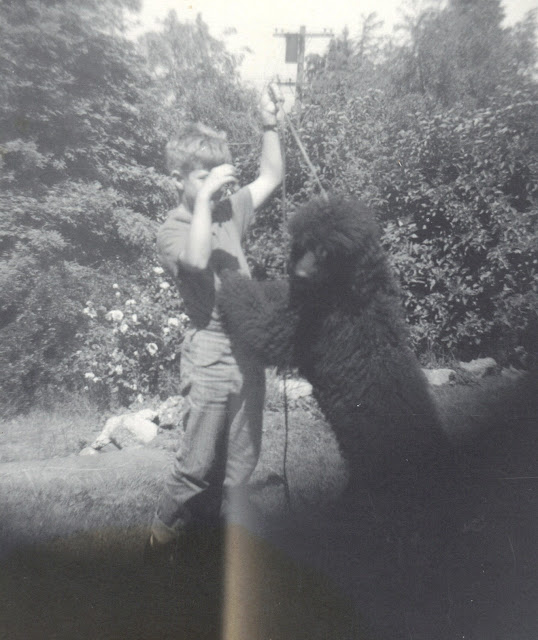 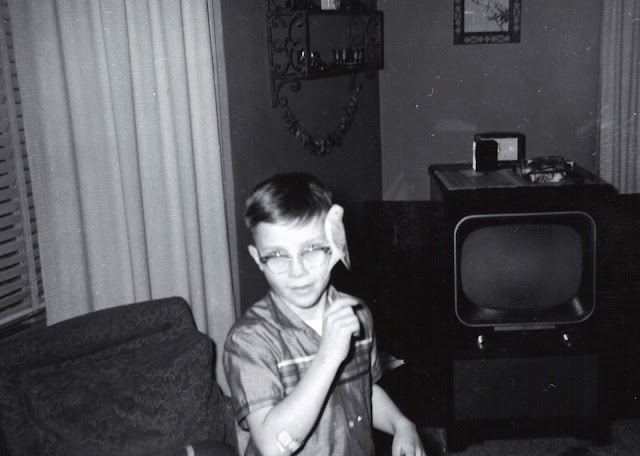 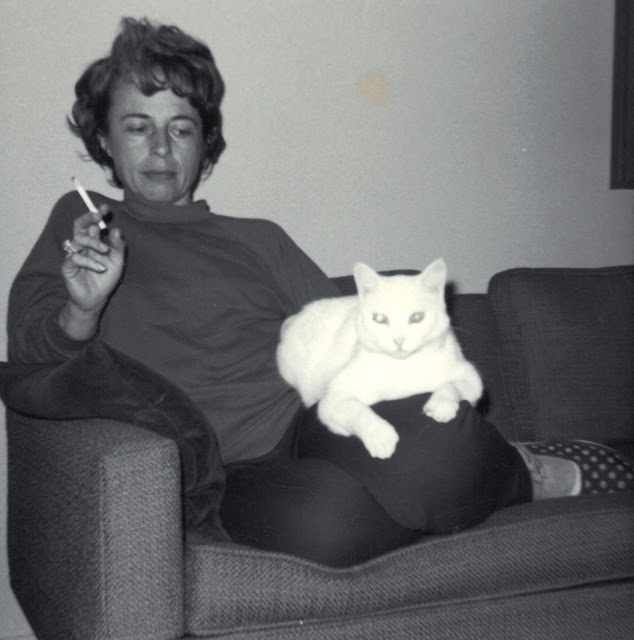 My great-aunt Mary Jo Plymale Brown and her cat (Snowball?) in 1972. 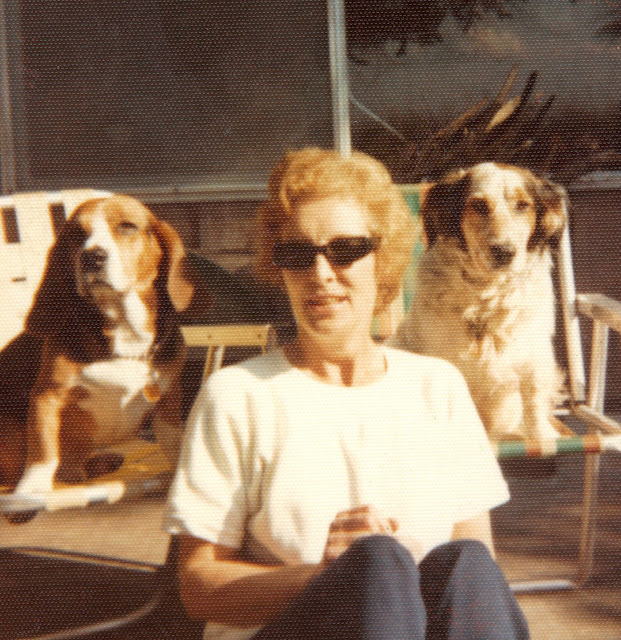 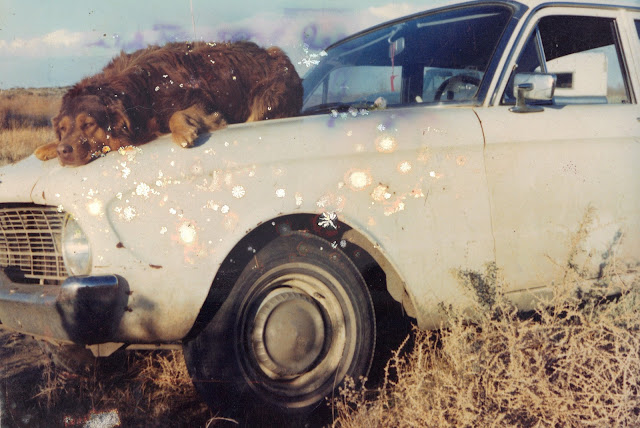 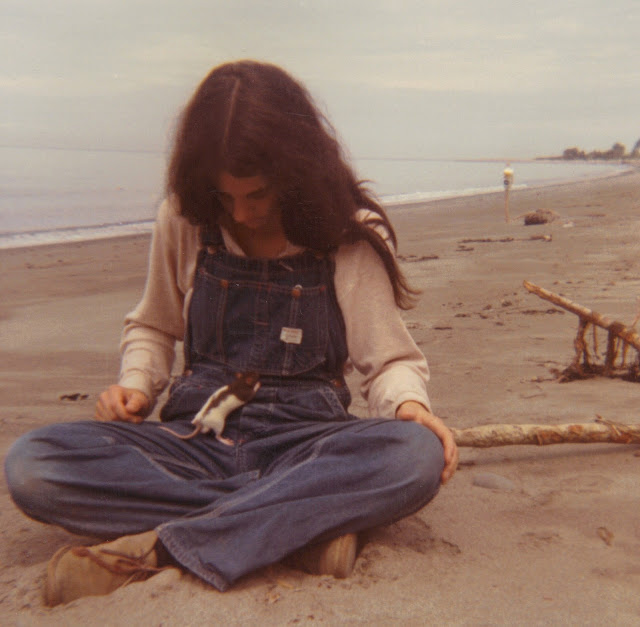 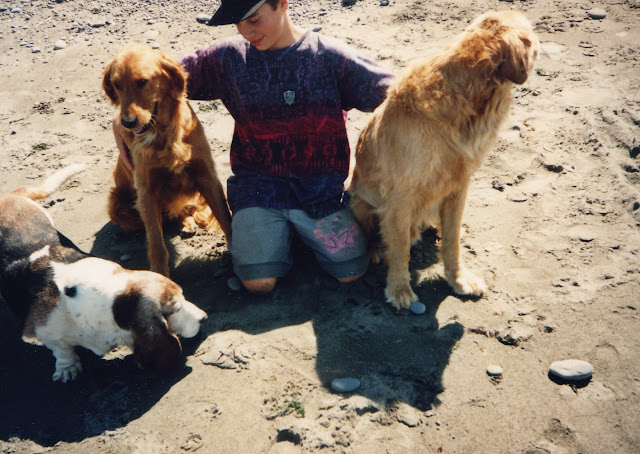 My brother Odin and three of our dogs, Fanny, Fred and Barney. 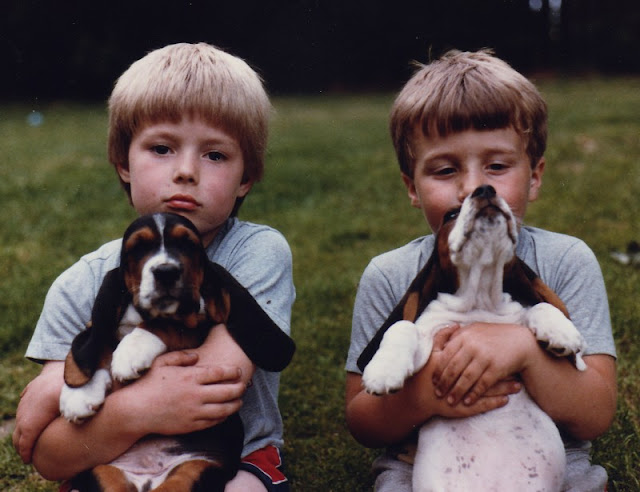 My cousin Ira (left) and my brother Odin with
two of our Basset Fanny's puppies, 1984. 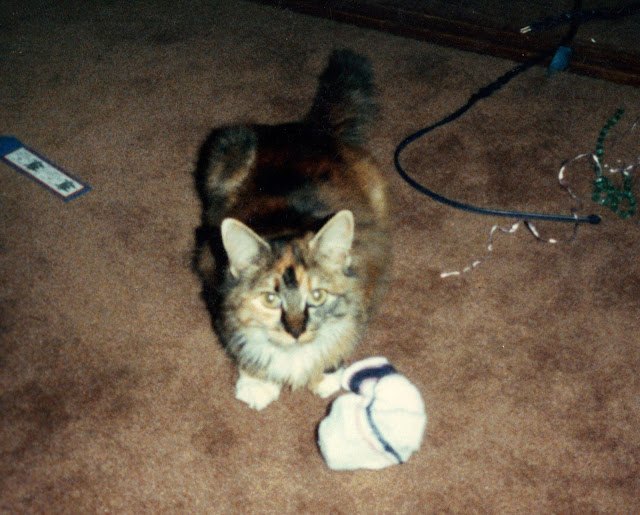 My grandmother Patricia Plymale's cat Candy, found as an orphan kitten in the 1980's. 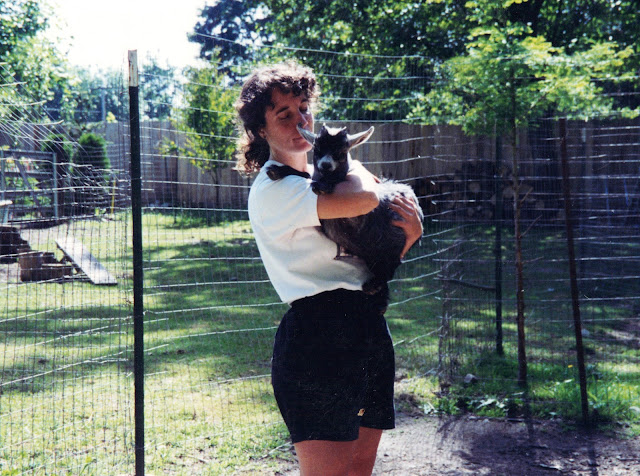 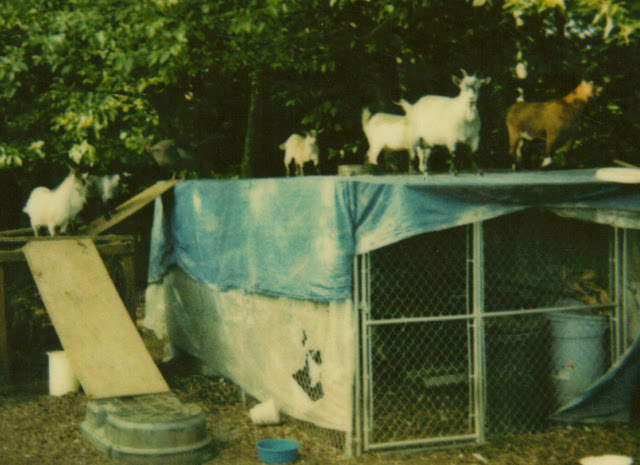 Some more of our Pygmy Goats (including Bill, Bob and Charleen). 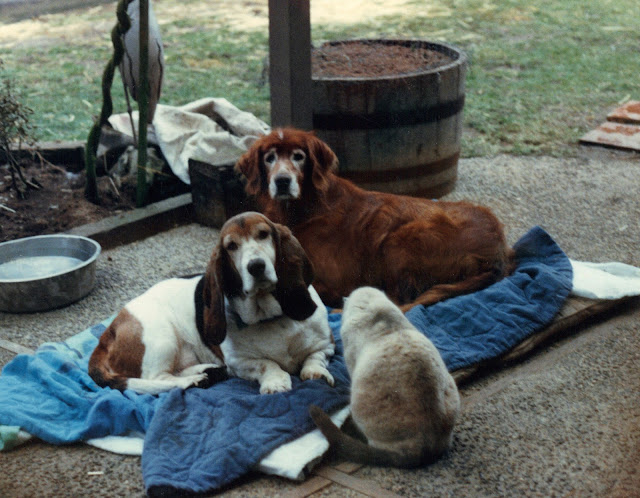 Three more of our pets: Fanny (the Basset Hound), Havoc (the Irish Setter) and Minnie (the cat). 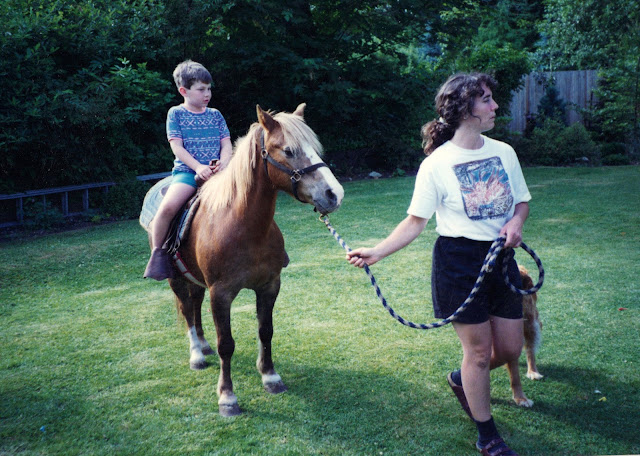 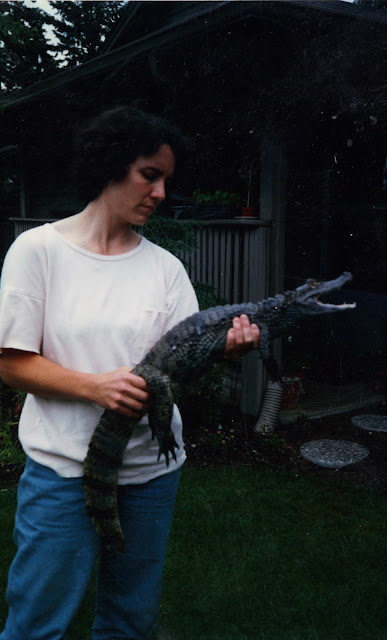 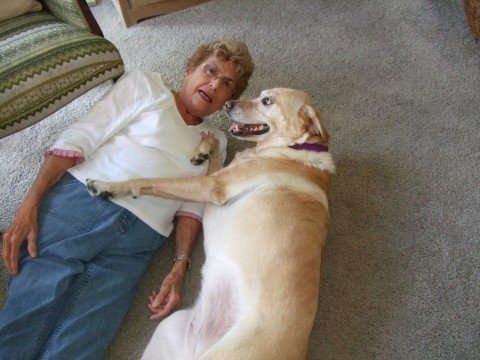 My grandmother Bettye Brown Staley playing with my aunt Karen's dog Nelly. (Photo stolen from Leslie Moe.)
Posted by Ryan Wadleigh at 11:52 AM